Please visit our Sizing Chart Page to make sure you get the best fit for your dog.

The bArctic creates a microclimate that allows your dog to spend more time outside year-round, soaking up healthy rays of sunlight known to be essential for optimal health; warms in cool temps, cools in hot sun, reduces risk of overheating. Coolvio® patented fabric technology converts sunlight, including harmful UV light, into healthy red and near-infrared light through laser physics and optics.  This is the same light veterinarians use in laser treatments that activates cellular energy, triggering a variety of wellness benefits. 100% Made in USA.

Wash Instructions
Turn inside out and machine or hand wash cold with like colors and hang dry (do not dry clean, iron or bleach).

Satisfaction Guarantee
We have a 100% Tail Wagging Guarantee!  If for any reason, you are unhappy with the fit or performance of your bArctic Light Therapy Dog Shirt, contact us at hello@coolvio.com within 30 days of purchase for a full refund or exchange.

Additional Guidance
Please note that wear and use of dog clothing should always be supervised. Never leave your dog unattended while wearing the bArctic. For dogs with injuries, please consult your veterinarian prior to having them wearing dog apparel.

We love the shirt! It's so bright and perfect so I don't lose sight of Falcor.

Thanks for your review! Falcor is adorable and he looks awesome in his bArctic. The orange looks amazing against his black fur. You can definitely spot him anywhere.

Frodo and Sully spend lots of time outside since we live on a lake. The shirts help keep them cool in the hot summer sun - and they work great under life vests too! 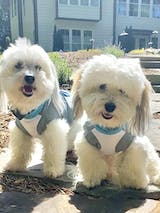 Frodo and Sully are adorable! We are happy that they are having a fun summer, while staying cool. Thanks for sharing and please keep us posted on their lake life adventures.

M
Marielle B. (Fort Mill, South Carolina)
This nut is calm! And cool!

I bought the shirt at Pet Palooza for my dog to keep him cool, after getting one for my other dog a week earlier. We love it. I truly believe he feels cooler in it as he is panting less and more active on our walks. What has been truly remarkable, however, is the calming effect it has had on him. The pic shows us in the car just after we bought the shirt. Generally, he HATES the car and is extremely anxious; he can’t sit still. This time, however, he literally fell asleep sitting up. A few seconds later, he was sprawled out on the car seat, snoozing. I actually pulled over at one point to make sure he was ok because it was so unlike him! (I thought he might have eaten something bad at the festival.) Nope, he was just chillin’. Then I put it on during a thunderstorm, and he slept right through it. Normally, he would be shaking under a table or chair. I can’t say enough about these shirts! 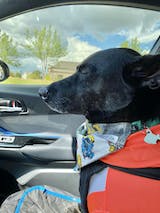 Hi Marielle! Reading your feedback brings happiness to our hearts. We are thrilled that you have noticed a significant difference in your dog. We made the bArctic so it could help dogs and their owners, and we are delighted that is has made a positive impact to you and your dogs.

Penny, our black and gray Great Dane, loves her Coolvio shirt. Amazing how comfy it is for her even when playing with other big dogs at doggie day care. Highly recommend!

We are so happy to hear that Penny loves her bArctic and that it helps her at doggie day care! We appreciate your review and please keep us posted on Penny.

We went to a festival yesterday and within 15 minutes, my golden retriever was anxious, panting, and her tail was down. She was hot, and she wasn’t happy. When we went into the shade, she perked up. My daughter noticed the coolvio vendor! Literally, the minute we put the product on, her demeanor changed! She was relaxed and happy. I was quite astonished. We spent the next 1.5 hours in the sun and heat; she was bouncing around, happy, and her tail was up and wagging the whole time! I am buying another one for my other dog! I usually don’t do long walks in the summer because we live in SC,and it’s too hot. Can’t wait to be able to continue our walks into the summer :) Oh, and the high visibility orange with reflective material is awesome too! 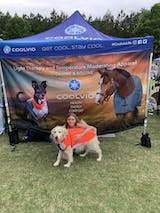 It was wonderful meeting you, your daughter, and your pup! We are thrilled that the bArctic was able to make your pup cooler and more relaxed at the festival, so you all could continue having fun. Welcome to our Coolvio Crew!

We are so happy that Logan LOVES his bArctic. He is a handsome boy and looks great in blue! Please keep us updated on Logan. We can't wait to see more pictures of him living the CoolvioLife!